Background. Despite considerable efforts, health disparities between people with high and low socioeconomic status (SES) have not changed over the past decades in The Netherlands. To create a culture of health and an environment in which all people can flourish, a shift in focus is needed from disease management towards health promotion. The Bolk model for Positive Health and Living Environment was used as a tool to guide this shift. This study aimed to describe how this model was used and perceived by stakeholders in a case study on an integrated health promotion approach for residents with low SES.

Methods. An instrumental case study was undertaken in Venserpolder, a neighborhood in Amsterdam South East of approximately 8500 residents. A participatory action approach was used that allowed continuous interaction between the residents, health care professionals, researchers, and other stakeholders. The Bolk model is a tool, based on the conceptual framework of positive health, that was developed to guide health promotion practice. Its use in the case study was evaluated by means of semistructured interviews with stakeholders, using qualitative directed content analyses.

Results. The Bolk model was found to be a useful tool to identify and map the needs and strengths of residents with low SES. The model facilitated the development and implementation of eight health promotion pilots by transforming the needs and strengths of residents into concrete actions carried out by responsible actors in the neighborhood. Although the Bolk model seemed to be accepted by all stakeholders, the shift towards positive health thinking appeared to be more embodied by local professionals than by residents. Adjustments were proposed to enhance the applicability of the model in a multicultural setting, to increase its cultural sensitivity and to use language more familiar to residents.

Conclusions. The Bolk model for positive health and living environment seems to be promising in the guidance of health promotion practices in Amsterdam South East. Further research and development are needed to improve its cultural sensitivity and to investigate its applicability in a broader range of public health settings. 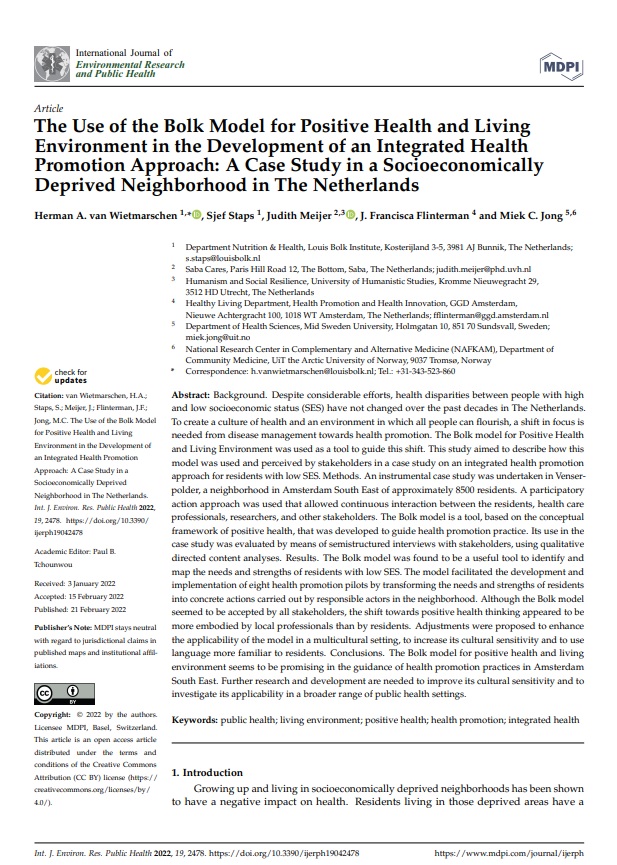