Optimism and perseverance are 2 important assets for soldiers to be able to perform competently in high-risk environments and to complete complex and stressful tasks. Traditionally, optimism is measured using questionnaires and most frequently in a retrospective manner, for example, after a mission is completed. As such, ability to persevere in challenging environments is generally taken into account when it is too late, that is, when the soldier is showing severe signs of deficiency or failing to persevere. Therefore, there is a need for more objective measurements with which to predict perseverance. We conducted and present 2 studies in which the hormone cortisol seems to play a key role, relating with optimism, and possibly predicting perseverance. In the first study, we measured cortisol levels during a computer-simulated military training mission. A significant correlation between cortisol levels and optimism measured by the revised Life Orientation Test (LOT-R) Scale was found. In the second study, we followed 29 recruits through a demanding military training course required for joining the Dutch Air Mobile Brigade. The recruits who persevered and completed the course had a higher cortisol response to a stressful training event compared with those who leave the course. A regression model showed that a combination of the soldiers’ optimism and cortisol response best predicted perseverance. This study shows that a combination of attitudinal instruments and a biomarker has potential for predicting military training course attrition. 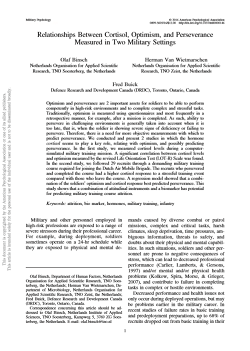