Studies on the prevalence of feather pecking in different commercial laying hen systems and its welfare and economic impacts are reviewed in the following paper. Current methods for controlling feather pecking include beak-trimming and alterations to light regimes, but these methods have significant disadvantages from the perspective of bird welfare. A substantial body of research has now identified risk factors for feather pecking during both the rearing and laying periods. It is argued that these findings can be translated into optimised management practices that can prevent and control feather pecking whilst simultaneously conferring welfare benefits. The genetic basis of feather pecking is considered, and studies that suggest group selection techniques could produce birds with a reduced tendency to feather peck in commercial flocks are highlighted. 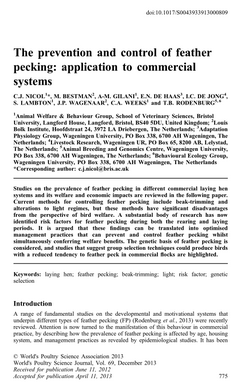