Postnatal development and puberty are times of strong physical maturation and require large quantities of energy. The hypothalamic neuropeptide melanin-concentrating hormone (MCH) regulates nutrient intake and energy homeostasis, but the underlying mechanisms are not completely understood. Here we use a novel rat knockout model in which the MCH precursor Pmch has been inactivated to study the effects of loss of MCH on energy regulation in more detail. Pmch-1- rats are lean, hypophagic, osteoporotic, and although endocrine parameters were changed in pmch-1- rats, endocrine dynamics were normal, indicating an adaptation to new homeostatic levels rather than disturbed metabolic mechanisms. Detailed body weight growth and feeding behavior analysis revealed that Pmch expression is particularly important during early rat development and puberty, i.e., the first 8 postnatal weeks. Loss of Pmch resulted in a 20% lower set point for body weight that was determined solely during this period and remained unchanged during adulthood. Although the final body weight is diet dependent, the Pmch-deficiency effect was similar for all diets tested in this study. Loss of Pmch affected energy expenditure in both young and adult rats, although these effects seem secondary to the observed hypophagia. Our findings show an important role for Pmch in energy homeostasis determination during early development and indicate that the MCH receptor 1 system is a plausible target for childhood obesity treatment, currently a major health issue in first world countries. 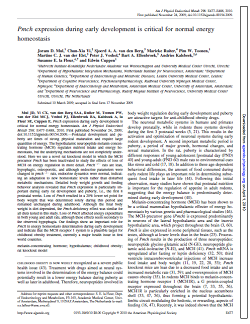