BACKGROUND:
"No questionnaire specifically measuring the core components of complementary and alternative medicine (CAM) use has been validated for use across European Union (EU) countries. We aimed to determine the face validity, acceptability and the participants' comprehension of a pre-existing questionnaire designed to measure 'CAM use', to provide a comparative, standardised questionnaire for use by health care providers, policy makers and purchasers throughout Europe.

METHODS:
"Established procedures were employed to translate the questionnaire into 4 EU languages. The translated questionnaires were piloted on 50 healthy adults from each country who may never have used CAM. 10 participants per country also took part in audio-recorded think aloud interviews about the questionnaire. The interviews were transcribed and analysed in the language in which they were conducted; findings were summarised in English. Questionnaire data were pooled across countries, and patterns of completion and missing data were analysed.

RESULTS:
"The questionnaire was translated into Italian, Spanish, Dutch and Romanian. The mean age of the participants was 43.6 years. 34% were male, 87.4% were either light or heavy CAM users, and 12.6% were non-users. Qualitative analysis identified common problems across countries including a 'hard-to-read' layout, misunderstood terminology and uncertainty in choosing response options. Quantitative analysis confirmed that a substantial minority of respondents failed to follow questionnaire instructions and that some questions had substantial rates of missing data.

CONCLUSIONS:
"The I-CAM-Q has low face validity and low acceptability, and is likely to produce biased estimates of CAM use if applied in England, Romania, Italy, The Netherlands or Spain. Further work is required to develop the layout, terms, some response options and instructions for completion before it can be used across the EU. 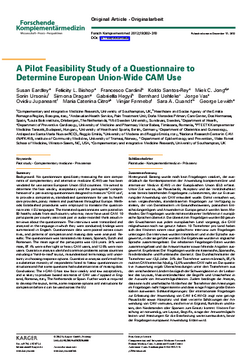