Objective: Digoxin is a therapeutic cardenolide widely used to treat various heart conditions such as atrial flutter, atrial fibrillation and heart failure in both Western as well as Chinese medicine. Digoxin is extracted from cultivated Digitalis lanata Ehrh. plants, known as Mao Hua Yang Di Huang in Chinese medicine. This manuscript presents two studies that were conducted to optimize the cultivation conditions for digoxin production in the TCM Mao Hua Yan Di Huang in a greenhouse under GAP conditions.

Methods: Two experiments were designed in which 4 growth conditions were compared. Levels of digoxin, gitoxin, digitoxin, α-acetyldigoxin, β-acetyl-digoxin were measured using HPLC-UV and compared between the conditions.

Results: Normal soil, no CO2 enrichment combined with a cold shock was found to be the optimal condition for producing digoxin in the first experiment. Gitoxin content was significantly lower in plants grown in this condition. Mechanical stress as well as the time of harvesting showed no statistically significant differences in the production of cardenolides. In the second experiment the optimal condition was found to be a combination of cold nights, sun screen, fertilizer use and no milled soil.

Conclusion: This study shows that digoxin production can be increased by controlling the growth conditions of D. lanata Ehrh. The effect of cold was important in both experiments for improving digoxin production. Cultivating Chinese herbal medicines in optimized greenhouse conditions might be an economically attractive alternative to regular open air cultivation. 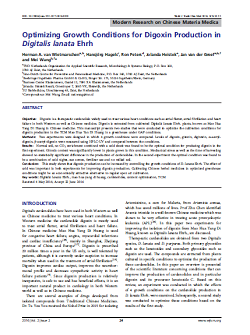