Ammonia (NH3) is difficult to monitor at atmospheric concentrations due its high solubility and reactivity and the strong spatial and temporal variations of its concentrations. Monitoring is mostly performed using passive samplers or filter packs with daily coverage at best. Only at a few sites ammonia is measured with more expensive wet chemical or spectroscopic measurement techniques. Instruments using an open path show the most potential as these avoid the use of inlets and thus the interactions of NH3 with tubing, filters, and inlets. Measurements on the vertical distribution of NH3 are even scarcer, with only a few available airborne and tower measurements. Satellite observations of NH3 show potential to be used for real-time monitoring as these have global coverage often with daily overpasses. Unfortunately, validation of satellite NH3 products representing the total atmospheric column with ground based instruments measuring in situ NH3 has been troublesome due to a lack of knowledge about the vertical distribution. Validation with FTIR instruments has shown potential but has been performed for only a limited number of stations. In this study we report on measurements performed during the Measuring atmospheric Ammonia with Remote Sensing (MARS) field campaign at Cabauw, the Netherlands. The aim of the campaign was to improve the general understanding of the vertical distribution of NH3. An approach was taken using four mini-DOAS instruments installed in the meteorological tower at Cabauw, supplemented by measurements with a MARGA and a mobile FTIR instrument. The measurements between May and October 2014 showed large variations in the concentrations and maximum concentrations reached up to 240 μg m−3. The lower three mini-DOAS and MARGA measurements showed large differences on an hourly basis, which were shown to originate from multiple measurement artefacts of the MARGA. The mini-DOAS concentrations varied sharply between the different levels with the lower three instruments showing maxima at night while the mini-DOAS at 160 m in the tower showed maxima during the day. The study shows that the daytime boundary layer is well-mixed with only small gradients between concentrations measured at various heights. Differences were found in the origin of the NH3 with the instrument at 20 m showing higher concentrations with transport from the north, where the largest nearby sources are located, while the instrument at 160 m showed the highest concentrations coming from the east which shows a more regional influence. The measurement campaign data is freely available for model and satellite validation studies. 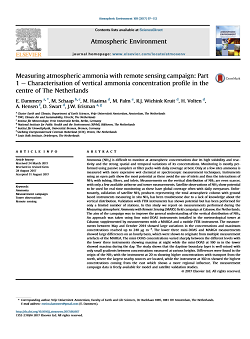