Metabolites have played an essential role in our understanding of life, health, and disease for thousands of years. This domain became much more important after the concept of metabolism was discovered. In the 1950s, mass spectrometry was coupled to chromatography and made the technique more applicationoriented and allowed the development of new profiling technologies. Since 1980, TNO has performed system-based metabolic profiling of body fluids, and combined with pattern recognition has led to many discoveries and contributed to the field known as metabolomics and systems biology. This review describes the development of related concepts and applications at TNO in the biomedical, pharmaceutical, nutritional, and microbiological fields, and provides an outlook for the future. 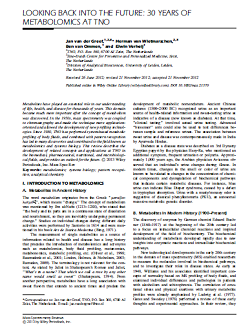