The maturing of Earth system science as a discipline has underpinned the development of concepts such as the Anthropocene and planetary boundaries. The International Geosphere–Biosphere Programme’s (IGBP) scientific and institutional history is deeply intertwined with the development of the concept of the Earth as a system as well as the discipline of Earth system science. Here we frame the broader programme of IGBP through its core projects and programme-level activities and illustrate this co-evolution. We identify and discuss three phases in the programme’s history. In its first phase beginning in 1986, IGBP focused on building international networks and global databases that were key to understanding Earth system component processes. In the early 2000s IGBP’s first major synthesis and associated activities promoted a more integrated view of the Earth system informed by greater emphasis on interdisciplinarity. Human actions were seen as an integral part of the Earth system and the concept of the Anthropocene came to the fore. In recent years IGBP has increased focus on sustainability and multifaceted engagement with policy processes. IGBP closed at the end of 2015 after three decades of coordinating international research on global change. The programme’s longevity points to its capacity to adapt its scientific and institutional structures to changing scientific and societal realities. Its history may offer lessons for the emerging Future Earth initiative as it seeks to rally international collaborative research around sustainability and solutions. 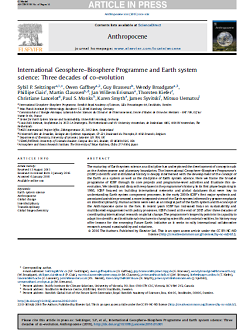