Nowadays, it seems that more and more people report health complaints like Non-Celiac Gluten sensitivity and Irritable Bowel Syndrome, this could be related to their grain, wheat and/or gluten intake. Modern wheat products and yeast based baking techniques often get blamed as possible causes of these complaints. Ancient wheat species might contain more protein and micronutrients, fibres, less resilient gluten and less FODMAPS, while having better glycaemic index in comparison to modern wheat species. The objectives of this research were (1) to explore what motivates people to consume ancient wheat products, (2) to map the scale and infrastructure ancient wheat varieties are grown, produced and processed in the Netherlands, and (3) to compare the effects of ancient and modern wheat products on perceived health in an intervention study were participants tried a different type of bread each week.
"
"Three studies were carried out. In the first study a random sample of people were asked about their experience with different wheat species, whether they have any health or physical related complaints when consuming them, what their reasons were to stop or switch to consume a certain wheat variety and whether this led to a change in health-related complaints. In the second study, growing trials were conducted under organic conditions on clay soil and protein content, ‘Zeleny’, wet gluten content, total dietary fibre and fructan content were analyzed. The third study was an observational study with a single semi-blind randomized crossover design, in which 46 women were randomly assigned to test a different bread each week over a period of five weeks (three breads made from ancient grains and two of the modern grain variant; and baked with sixteen hour sourdough fermentation or standard yeast) and filled out an online questionnaires before and after testing each bread.
"
"This research showed that some people indicate to experience health complaints with consuming modern wheat products in the Netherlands, with some of these people experiencing less complaints when switching to ancient wheat species. Although only minor differences between ancient and modern wheat breads were found within the laboratory analyses and the randomized intervention study, a shift to more resilient gluten in the modern species was found compared to spelt and emmer sourdough breads, which seemed to reduce some abdominal related complaints. Also, these ancient wheat based breads seemed to delay onset of hunger compared to modern white cereal bread. Therefore, these results indicate that consumption of ancient grains, especially as sourdough breads, such as spelt and to a less extent emmer, might reduce some health complaints. More research should be conducted to confirm these results. 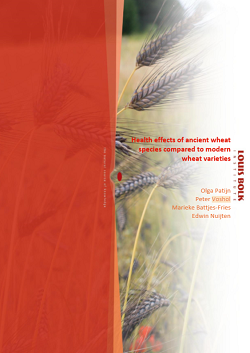