Ammonia (NH3) emissions in the atmosphere have strongly increased in the past decades, largely because of the intensive livestock production and use of fertilizers. As a short-lived species, NH3 is highly variable in the atmosphere and its concentration is generally small, except in and close to local source areas. While ground-based measurements are possible, they are challenging and sparse. Advanced infrared sounders in orbit have recently demonstrated their capability to measure NH3, offering a new tool to refine global and regional budgets. In this paper we describe an improved retrieval scheme of NH3 total columns from the measurements of the Infrared Atmospheric Sounding Interferometer (IASI). It exploits the hyperspectral character of this instrument by using an extended spectral range (800–1200 cm−1) where NH3 is optically active. This scheme consists of the calculation of a dimensionless spectral index from the IASI level1C radiances, which is subsequently converted to a total NH3 column using look-up-tables built from forward radiative transfer model simulations. We show how to retrieve the NH3 total columns from IASI quasi-globally and twice daily, above both land and sea, without large computational resources and with an improved detection limit. The retrieval also provides error characterization on the retrieved columns. Five years of IASI measurements (1 November 2007 to 31 October 2012) have been processed to acquire the first global and multiple-year dataset of NH3 total columns, which are evaluated and compared to similar products from other retrieval methods. Spatial distributions from the five years dataset are provided and analyzed at global and regional scales. We show in particular the ability of this method to identify smaller emission sources than those reported previously, as well as transport patterns above sea. The five year time series is further examined in terms of seasonality and inter-annual variability (in particular as a function of fire activity) separately for the Northern and Southern Hemispheres. 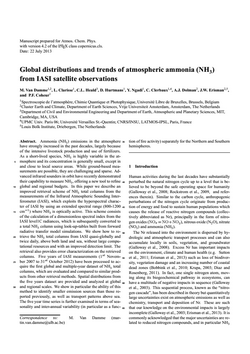