Elevating soil organic matter (SOM) levels through changes in grassland management may contribute to lower greenhouse gas concentrations in the atmosphere and mitigate climate change. SOM dynamics of grassland soils may be affected by grazing systems and plant species composition. We analyzed the effects of simulated grazing systems (continuous (CG), rotational (RG), and lenient strip grazing (LG)) and species composition (monocultures of perennial ryegrass fertilized (LP+) and unfertilized (LP−)), tall fescue (fertilized, FA+), and a mixture of these two species with white clover (fertilized, LFT+)) on root biomass and SOM dynamics in field experiments on loamy and sandy soils in the Netherlands. Dried cattle manure was added to all fertilized treatments. We hypothesized that SOM accumulation would be highest under CG and LG, and FA+ and LFT+ as a consequence of greater belowground biomass production. SOM was monitored after conversion from arable land for a period of two years (loamy and sandy soil) and five years (sandy soil). We found that management practices to increase SOM storage were strongly influenced by sampling depth and length of the grassland period. SOM increased significantly in nearly all fertilized treatments in the 0–60 cm layer. No differences between species compositions were found. However, when only the 30–60 cm soil layer was considered, significantly higher SOM increases were found under FA+, which is consistent with its greater root biomass than the other species. SOM increases tended to be higher under LG than RG. The results of this study suggest that it seems possible to comply with the 4-thousandth initiative during a period of five years with fertilized perennial ryegrass or tall fescue in monoculture after conversion from arable land. It remains to be investigated to which extent this sequestration of carbon can be maintained after converting grassland back to arable land. 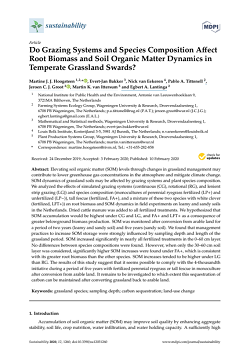