Potato (Solanum tuberosum L.) requires abundant nitrogen (N) to perform well and has low nitrogen use efficiency (NUE). We assessed phenotypic variation among 189 potato cultivars for NUE and the association between NUE and ecophysiological variables describing canopy development (CDv), under high and low N input. In 2009 and 2010, 189 cultivars were grown with N supply (soil N + fertiliser N) of 75 or 180 kg N/ha at Bant, the Netherlands. CDv was assessed weekly as the percentage of soil covered by green potato leaves (%SC). Data were analysed using a model that described CDv as a function of thermal time, based on the Beta function and estimates of cardinal temperatures. Nitrogen significantly affected model-derived, biologically relevant, curve-fit parameters for each cultivar. The t 1 (i.e., thermal time required to reach maximum soil cover (Vx)) was higher at low than at high N. Other parameters were higher at high than at low N, especially Vx and the period over which it was maintained. Nitrogen also affected tuber dry matter yield, tuber size and weight distributions, N content and N uptake but not tuber dry matter percentage. The total area under the %SC curve was highly correlated with yield in both years. Cultivars performing well under high N also performed well under low N. There was large variation in NUE component traits among cultivars; maturity type partially explained this variation. Variables of the CDv model captured this variation, N effects on light interception and its correlation with yield. 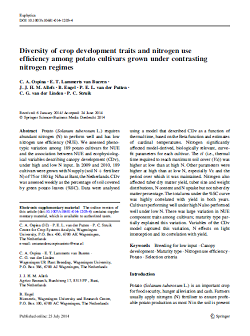