Objective
"As there are pharmacological differences between males and females, and glucocorticoid (GC) treatment is associated with increased cardiovascular mortality rate in rheumatoid arthritis (RA) patients, it is important to study serum polar lipid proï¬les of male and female patients in response to GC therapy. Gender differences may require an adjustment to the treatment strategy for a selection of patients.

Methods
"Serum samples from 281 RA patients were analysed using a targeted lipidomics platform. The differences in GC use and gender on polar lipid proï¬les were cross sectionally examined by multiple linear regressions, while correcting for confounding factors.

Results
"Differences in polar lipids between GC users and non-GC users in females and males were merely restricted to lysophospholipids (lysophosphatidylcholines and lysophosphatidylethanolamines). Lysophospholipids in female patients treated with GCs were signiï¬cantly higher than female patients not treated with GCs (p = 6.0 E-6), whereas no signiï¬cant difference was observed in male GC users versus non-users (p = 0.397).

Conclusion
"The lysophospholipid proï¬les in response to GCs were signiï¬cantly different between male and female RA patients, which may have implications for the cardiovascular risk of GC treatment.
" 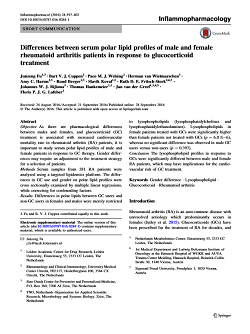