Grass-clover mixtures show many benefits for sustainable agriculture. In the Netherlands, organic farmers often work together in a so-called partner farm concept, with the aim to close nutrient cycles on a regional level. In this system, arable farms grow one-year grass-clover leys, as fodder for a livestock farm, in exchange for, e.g., manure. This practice could also be used in the transition of conventional farms towards a more circular regenerative and nature inclusive agriculture. In the current experiment we assessed the effect of a range of grass (Lolium perenne: Lp, Lolium multiflorum: Lm) and clover (Trifolium pratense: Tp and Trifolium repens: Tr) monocultures and mixtures on both below- and aboveground parameters in light of benefits for livestock and arable farms, and biodiversity. The grass monocultures showed good weed suppression, high root density, and especially Lp had a positive effect on soil structure. Clover, on the other hand, showed high herbage dry matter yield (particularly Tp) and Nitrogen (N) yield, and Tr showed high digestibility. Moreover, clover had a positive effect on the soil mineral N, and earthworm abundance tended to be higher in the clover monocultures. When (some of) the four species were combined in grass-clover mixtures, they combined the positive effects of the species and often even outperformed the (best) monocultures. We concluded that grass-clover mixtures increased agro-ecological functions. 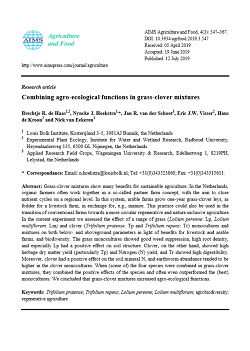