The lupins are an interesting group of legume crop species that produce large seeds containing up to 40% protein. The genus Lupinus is part of the tribe Genisteae. More than 170 species have been described from the New World and only 12 species from Europe, North and East Africa. Wild lupins are bitter and toxic because they produce quinolizidine alkaloids as a means of chemical defence. During domestication, lupins with low alkaloid contents were selected, leading to ‘sweet lupins with alkaloid contents below 0.02% in the protein-rich seeds, which can be used both for human and animal consumption. The domesticated lupins include Lupinus angustifolius, Lupinus albus, Lupinus luteus and Lupinus mutabilis. Blue or narrow-leafed lupin (L. angustifolius) is the most widely cultivated of them, with a worldwide production of more than 1.3 million t. Several challenges remain for lupin breeding, including the improvement of quantitative and qualitative traits, adaptation to alkaline soil and resistance to fungal pathogens. 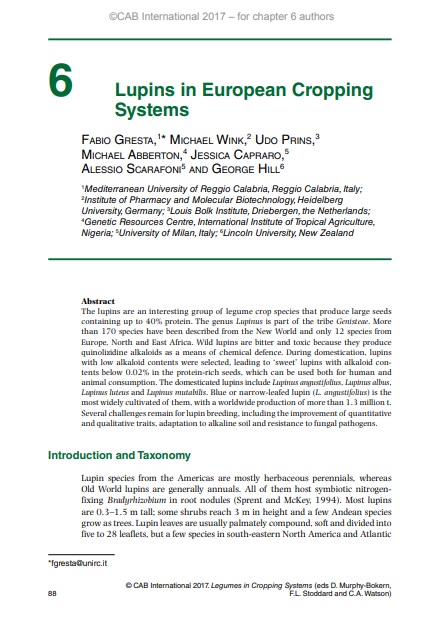